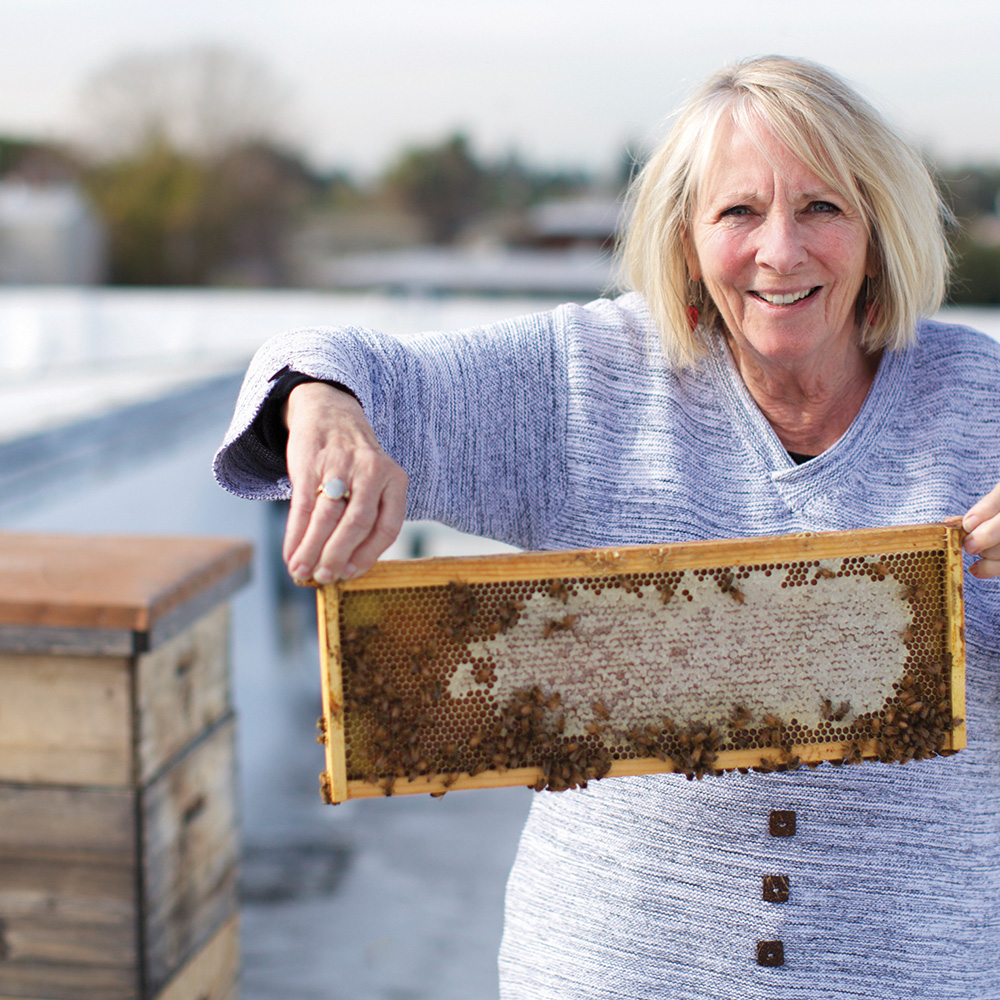 I loved the Alameda Marketplace, an oasis of good food on Park Street in Alameda, long before I got to interview its founder. The brick building filled with independent artisans is a favorite lunch stop for a beautiful kale caesar salad (with marinated anchovies, no less), the only purchase I plan, yet inevitably I get distracted, wander through the market and pick up organic fruit or groceries not available in my neighborhood, or an addictive cheese stick or macaron from the bakery. Despite spending so much time there as a customer, I had no idea who owned it or what it might have taken to put such a place together. Standing in the European-style market hall bustling with activity, it simply seems like it has always been there. Inevitable. How wrong I was. The journey from vacant Ford dealership to marketplace was long and bumpy, requiring a level-headed but gutsy driver, and that driver is Donna Layburn.

Donna was in the vitamin business. After leaving her mortgage banking career of twelve years in the early 1990s, Donna’s lifelong interested in natural health and wellness led her to study acupressure and massage before her (now) husband Gerald found a health food store for sale on Piedmont Avenue in Oakland. This wasn’t her first foray into retail. In her past life as a “coastside hippy” she owned the Indigo Tub, a yarn and basket-weaving shop in Half Moon Bay. She calls those her “Earth Mother” years, experimenting with organic gardening and beekeeping while she raised her young daughters. Focused on clean vitamins and supplements, her health food store opened in 1996 and took off. Demand prompted a second store to open in Alameda in 1998. As business grew, the limitations of 1000-square-feet stores became obvious as special orders began to stack up around them, and prevented expansion into groceries and produce. They needed more space.

But they certainly weren’t planning on 19,430 square feet of space.

As they considered larger spaces, Donna spied a “for lease” sign on the old vacant Ford dealership at 1650 Park Street, at the east end of the main retail drag in Alameda. Gerald suggested if Donna “were really smart,” she would take the whole building and create a market hall. That did it – she was all in. Donna asked her contractor brother about the feasibility and logistics of the project, and signed a 39-year lease in 2001. 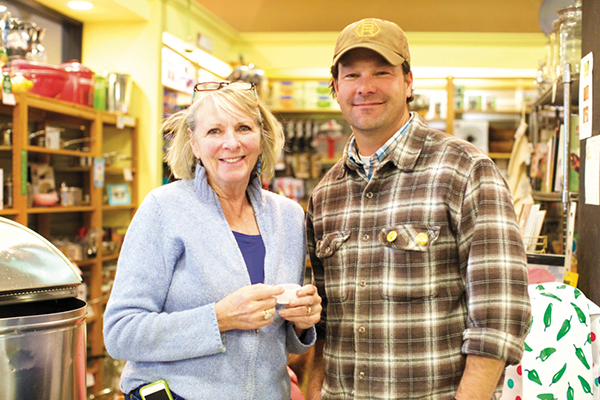 Donna Layburn with Mike Vigo of the Bee Ranchers.

As the project progressed, the initial $700K construction budget eventually tripled, with Donna and her family shouldering the ballooning bill with “25-30 credit cards,” and mortgages on “every house in the family.” In a single winter month, Donna lost her father, both her grandson and husband underwent major surgery, and four tenants dropped out of the marketplace. One wouldn’t have blamed Donna for throwing in the towel at that point, but she continued. Not only that, she describes it as an incredible moment, a “cleansing time” in her life.

Construction headaches aside, Donna had to find the right vendors, local businesses focused on organic and sustainable food. After turning down large chain operations, Donna’s vision reached several would-be entrepreneurs via an article in the San Francisco Chronicle.

Farmstead Wine & Cheese were the first tenants confirmed after owner Jeff Diamond read the Chronicle profile. Rick Kellner was next, charming Donna with his unbridled passion for dough and bread baking, not to mention a beautiful round loaf with the Alameda Marketplace logo carved into the top. Over the next months, “obstacles came and went,” and the marketplace filled.

With its inaugural crop of vendors in place, anchored by Donna’s Alameda Natural Grocery, Alameda Marketplace opened in 2003 and has been a huge success. Fourteen years later, that marketplace has evolved into a community treasure voted “Best One-Stop Shop for Foodies” by the East Bay Express. Donna herself has won awards, but she is proudest of what her employees and vendors have accomplished.

Rick Kellner’s business, Feel Good Bakery, for example, has grown from selling only bread in a corner space to an offsite baking operation with multiple retail locations, 41 employees, and an expansive menu filled with laminated pastries, tarts, cakes, colorful Parisian macarons, and the aforementioned cheese breadstick so good Whole Foods wanted to carry it. 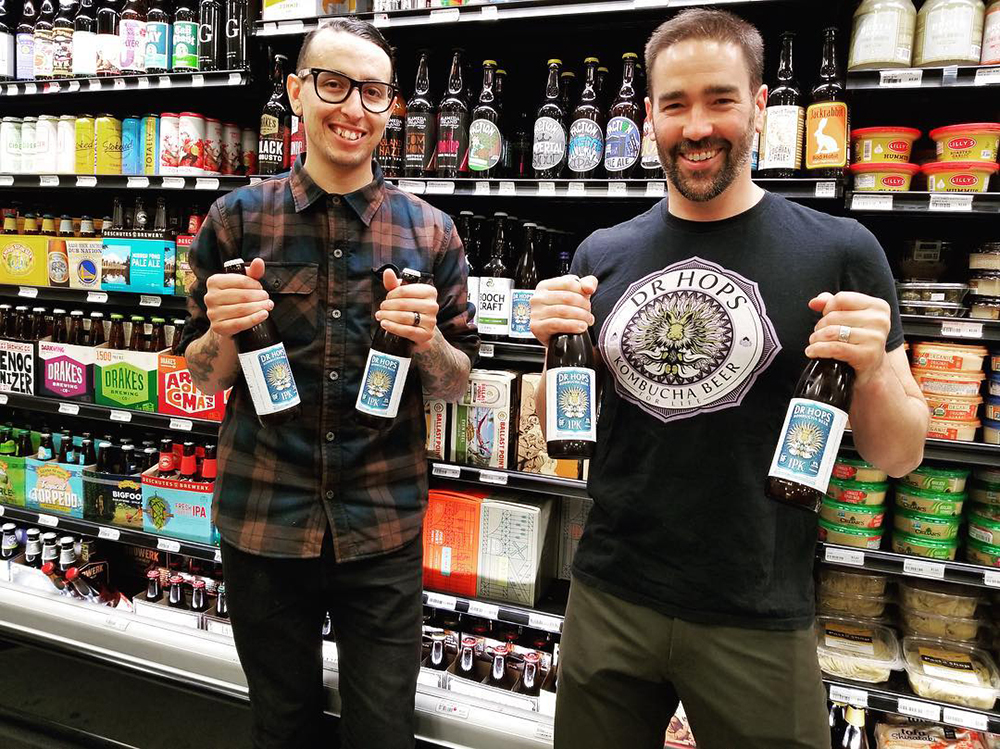 Donna also uses the marketplace platform to share her passion for sustainable agriculture and the environmental impact of choosing organic. Motivated by Queen of the Sun, a stirring 2010 documentary on honeybee colony collapse disorder, Donna installed honeybee hives to the rooftop with the help of a local beekeeper. Harvested and jarred twice per year, the honey produced by these hardworking bees is unique to Alameda (as bees avoid crossing bodies of water) and flies off the shelves.

Soon there will be a second set of rooftop hives on Donna’s team. At an age when most people are planning retirement, Donna is choosing to expand by becoming a partner in the Castro Valley Marketplace, an artisanal food hall spanning three floors, one of which will be anchored by Castro Valley Natural Grocery. Donna and her team looked to open a second location for some time, but none of the locations were quite right, and stand-alone spaces lacked the compelling “synergy of the collective” found in a marketplace.

Donna is investing in the new project to reward her dedicated employees with growth opportunities and an ownership stake, rather than selling the business to an outside party who “wouldn’t carry on that passion” when she is eventually ready to retire. Donna’s exit strategy is to sell the business to her team through an Employee Stock Ownership Program (ESOP) she has created, believing the ESOP will be even more successful with two locations. However, it will take time before the ESOP can be funded as the new location is built out, and it’s a financial risk. Why take this leap now? With a lilting smile and slight sparkle in her eye, Donna says “At a certain point in your life, you don’t need any more money. [Our employees] have been with us forever, and deserve something good.”

A Love Letter to Castro Valley